Breathe in. One week ago: I am watching the CBC coverage of the American election and after 6 ½ hours Peter Mansbridge gets himself a chair and sits down promising we will stay with you till the very end. Results roll in and my stomach roars. Bood pulses, hands clench, jaw tightens, knees lock, cuticles bristle, forehead prickles, ears throb, and that map turns red. Breathe out. Fuck.

This edition of CdnTimes is dedicated to BODIES. This was not the introduction I had planned to write, but I can’t swallow these election results, can’t digest what has been revealed. As anti-Trump rallies ignite the globe, hundreds of reports of hate speech, death threats, misogyny, racist graffiti, acts of intimidation and violence are flooding the news and social media. The fear is growing – and it’s viceral. People are going to get hurt, expelled from the country, lose their rights, be grabbed, attacked, arrested, killed. They are afraid, not just afraid of an uncertain economic future, but of the dangers posed to their bodies.

While the body is what allows us to perceive each other, it is also how we perceive each other as Other. As politically divided territories: US and Them. For the next three weeks, our CdnTimes writers will consider the limits we place on one another based on how we regard each other’s bodies. As they tackle big questions of power and access, they will contemplate our corporeal forms as a place for personal action, change, and perhaps even a place for hope.

In our first article Making Stages Accessible, Dan Watson in Toronto picks up a thread sewn by Clayton Baraniuk when he asked Can Canada Unlimit Itself? Dan shares his experience in residence at The Theatre Centre where bodies in collaboration lead to new ways of making and performing work. A joyous and unflinching portrait of four individuals whose lives have been shaped, in part, by cerebral palsy, their show This is the point runs until November 20

On November 22, CdnTimes is proud to feature a response by Toronto actor Clare Preuss to a tabloid article written about her that she found published online. In detail, it juxtaposes her appearance as Caroline Krafft accomplished Mathlete from the cult film Mean Girls, with photos of her out of costume to demonstrate that she is “actually crazy beautiful in real life”. Clare’s creative reply to this unsolicited media attention is an artful ritual that brings with it surprising results.

An article by Elaine Lee will land on November 29, finishing this edition. The Playwright in Residence with Inside Out Theatre, Elaine, who was born with a rare condition called Osteogenesis Imperfecta (aka Brittle Bones)will share her thoughts on the performing body. She asks: is the body the art or the art the body, especially when society may deem it to be deformed, ugly or unconventional?

I invite you to take a closer look. Breathe deeply, and hold on tight.

P.S. Thank you to Adrienne Wong my co-Editor for working with me on this, my very first Editor’s Note for CdnTimes. It’s exciting to be here to promote dialogue around topics of performance in Canada. In our new format, you can join the conversation in the weeks between each article being posted by following us @SpiderWebShow and using the hashtag #CdnBodies

Behind the Scenes of “Make Love, Not Art” 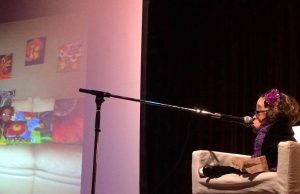 As a fine and performing arts artist born with Osteogenesis Imperfecta (also known as Brittle Bones), this puts me at a weight of 27lbs....

When You Tell Me I’m Pretty I Shave My Head 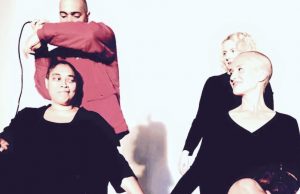 Last month, artists gathered at Kabin Studio in Toronto’s east end to engage in a live-art ritual. Donna-Michelle St. Bernard and I had our... 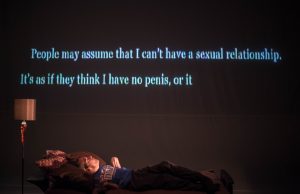 For the past 2-years we’ve been making a show at The Theatre Centre called This is the Point. It’s about love and sex and...