Join Keshia Palm, Santiago Guzmán, Miki Wolf, and Kayvon Khoshkam on December 1st at 8:15pm for the third instalment of our 2022 Thought Residencies: How is our art informed by where we’re from? Catch is LIVE on our instagram: @spiderwebshow.

Keshia Palm is a Filipinx-German artist from Treaty 6 Territory who seeks to dismantle systems of oppression by creating thoughtful and inclusive art/spaces — as Producer, Director, Dramaturge, Playwright, and Actor. They have developed and performed new works with IBPOC, queer, women, and trans artists coast to coast. Since 2016, they’ve found community where there are trees standing in the water creating art, and supporting emerging artists through ArtistProducerResource.com, and artistic producing the Paprika Festival.

Santiago Guzmán (he/him/they) is an award-winning playwright, performer, director, and dramaturge originally from Metepec, Mexico, now based in St. John’s, NL. Santiago’s work aims to put local, under-represented narratives and characters on the frontlines, whilst inviting audiences to appreciate the vibrancy of Newfoundland and Labrador from a diverse perspective. As an immigrant, queer, and artist of colour, Santiago believes that representation matters.
www.sguzman.ca

Kayvon Khoshkam (he/him) is a Canadian director, actor, producer, writer and musician. He was born and raised in Saskatoon, SK. He is a graduate of The Canadian College of Performing Arts with a focus on playwriting. He founded the Pull Festival: Vancouver’s 10 minute play festival (2012-2019), and was the Artistic Director of SpeakEasy Theatre (2016-2021). In 2015, Kayvon had the honour of being a member of The National Arts Centre’s English Theatre ensemble. Kayvon has worked across Canada, the United States and overseas. 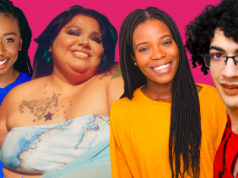