This is the third in a series of articles capturing the planned conversations and discussions at the inaugural Festival of Live Digital Art (foldA), in Kingston ON, June 19-June 21, 2018. Signy Lynch writes about a conversation between Jesse Brown and Michael Wheeler that was presented in the Film Department Lobby of the Isabel Bader Centre for the Performance Arts titled “Canadaland the Podcast, the Book, the Play”.

An array of individuals gathered at the Isabel Bader Centre for the Performing Arts in Kingston, Ontario for a panel on Canadaland, the Canadian media and politics podcast. Attendees included theatre artists—some of them tech whizzes and some self-admitted technophobes (Donna Michelle St. Bernard said in an earlier panel on technology and disruption ‘for me the technology is the disruption’)—industry people and administrators, and academics like myself.

Canadaland founder Jesse Brown and Spiderwebshow Artistic Director Michael Wheeler met to discuss the relationship between the Canadaland podcast, the related book, A Canadaland Guide to Canada, and the live show, directed by Wheeler. For me this panel prompted several key questions: how can we understand the popularity of podcasts (and related live shows), and what tools might they offer to theatre/performance makers? What is the relationship between the live and the recorded? Finally, If the medium is the message then what messages is Canadaland communicating through these multiple forms? 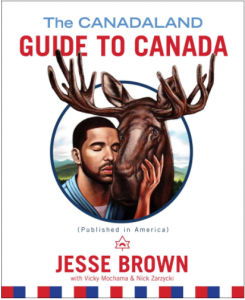 A Canadaland Guide to Canada’s World Tour of Canada, described by Brown as, ‘a comedy show with an audiovisual treatment,’ was conceived of to promote the Canadaland book. It toured to several sold-out crowds at music venues and converted old movie theatres last year. Brown characterized it as part of an emerging circuit of non-traditional live performance (another example brought up was the popular ‘Drunk Feminist Films’ events) described as, ‘like theatre that people want to go to’.

To the envy of some theatre makers, live shows spun-off of podcasts are becoming a defining element of the podcast form, and will readily fill an auditorium. Brown reported that some media companies are now looking to develop podcasts specifically for the purpose of securing the revenue from an accompanying live show. So how do these forms relate? Do they provide audiences with two different yet complementary experiences, or instead offer one continuous experience running through two different forms?

Through Wheeler and Brown’s discussion, it became clear that the two forms are shaping each other. Live shows attended by podcast fans may in turn be recorded as podcast episodes. However, Brown said that he generally prefers to listen to episodes recorded in a studio over those recorded live. To maximize enjoyment, the challenge then becomes how to design a live show that is equally enjoyable as a podcast episode. Brown offered one suggestion: that ‘the audience has to do something more than just clap.’

A key difference between a traditional podcast and a live show is the move from solo listening to a collective experience. Those attending the show in person can experience this collectivity in ways that aren’t available to those listening in, so by incorporating the voices of audience members perhaps some of this experience can be transmitted to podcast listeners. Interestingly, this demonstrates how the development of these works happens on an intermedial level.

But what kind of experience is being shared here? An audience member at the panel mentioned that the appeal of podcasts lies in the intimacy they create for their listeners; perhaps satisfying what Walter Benjamin called “the desire of contemporary masses to bring things “closer” spatially and humanly,” (Benjamin 225). In their own ways, both the podcast and live show could be said to be working towards this end and chase different kinds of intimacy (or immediacy): the visual and spatial intimacy of the live show and the aural intimacy of the podcast.

Drunk Feminist Films has had success turning a prerecorded show into a live event.

Another way to understand their relationship is through Philip Auslander’s argument that live performance has become a way of authenticating and ‘naturalizing’ the mediatized: “according to a simple logic that appeals to our nostalgia for what we assumed was the im-mediate: if the mediatized image can be recreated in a live setting, it must have been “real” to begin with”  (43). At the same time, Brown speculated that people are attracted to these live shows in order to “be a part of the podcast”. In this way, the live show both validates the authenticity or ‘realness’ (and thus the listening experience) of the podcast, and is also a means to incorporate the podcast’s listeners into the recorded work.

Also interesting to me was what the discussion revealed about the role of place in podcasts. Despite the podcast form being ‘freed’ from the strictures of the local (unlike ‘traditional’ theatre), the local still plays an important role. Brown speculated that audiences may be drawn to live podcast shows by the feeling that something will happen that’s particular to a place (‘how will Toronto respond to the show?’). Travelling podcasts and live shows generally try to capitalize on this by integrating something local–for example, having audience members share personal stories. This act could be said to put the place back into the unlocalized podcast form.

When asked what strategies Canadian content creators can use to engage with larger audiences, Brown noted that creators should be hyper-specific rather than broadening their scope, and not erase a sense of place. To pitch to the United States, Brown would narrow in, making a podcast about a place (as opposed to just set in one), mentioning a Thunder Bay podcast in development and the hugely popular S-Town about a small Alabama town.

This point was particularly intriguing to me because of a comment in an earlier panel that podcasts are useful to theatre artists for their ability to break out of regional lines. Here we see how podcast content may travel across regional lines but still remain itself strongly localized. This trend towards the specific demonstrates another kind of drive to intimacy and immediacy, as the podcast creates for its audiences up-close experience of places that may be far away.

The panel finished with a few comments about how podcasts can be politically useful through their ability to challenge dominant narratives. I would have liked to have heard more, but the brief discussion left me with the question: how much does this possibility for subcultural expression inform podcasts’ widespread appeal?